Queer: A Graphic History by Meg-John Barker and Julia Scheele: a review 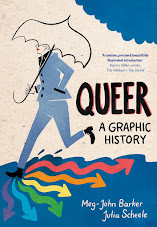 I got this book because I needed some theory texts, and you got to support your local libraries, especially after this last year. I got this one in particular because I felt like it might be somewhat more digestible than many of the theory texts that I’ve been subjected to during my time at uni. Spoiler alert: I was right. It’s actually not that common that I read whole texts when it comes to theory; I usually skim through to find what I need, but this wasn’t like that at all.

Queer: A Graphic History by Meg-John Barker and Julia Scheele is a graphic novel that serves as an introduction to queer theory and its history. It’s a great stepping-stone for anyone who is trying to get into reading theory.

This really is the way you make theory interesting. If I’d have had this during the theory module of my undergrad, I’d have had a way better time. Instead, I was left trying to understand eco-criticism by relating it to Chicken Run. If you’re looking to get into theory, or you’ve struggled with it in the past, this is definitely the book for you. This is proof that theory can be interesting, but academics seem to prefer their work to be as difficult to get through as possible. I don’t mean that academics should make their work accessible to those who aren’t in that field. I’m not expecting to be able to read a paper on, say, thermo-nuclear physics because I haven’t ever studied anything in that area, but I have a bachelor’s in English and Creative Writing, and I’m not far from getting a Master’s in Creative Writing, and I am so put off by so much of the theory text I have tried to read. That was a bit of a tangent, I guess, but the point I was trying to make was that this is a great way for you to read theory without getting a headache.

I’m really appreciative of the fact that there’s an acknowledgement that, throughout history, much of the focus of activism within the queer community has been predominantly focussed on gay men and lesbians, despite the work that many other members of the community have put in. It isn’t something that’s acknowledged all that much, and it’s good to see. On a similar note, there’s a lot of looking into how class and race plays into queer theory and activism. It’s a book that packs a hell of a lot into less than 200 pages.

The one thing I will say is that you will get that feeling of seeing a word over and over again, and it makes you not feel like it’s a word anymore. It’s not surprising that the word “queer” comes up a lot, but I did certainly begin to just see the word as a jumble of letters. It’s not necessarily a negative at all, but I do feel it worth pointing out.

I’m not going to recommend that everyone go out and read this immediately, but I know there’s a fair whack of people that read my reviews who would absolutely love this, or at least they’d get a lot out of it. I’m really glad I read this, which isn’t necessarily something I expected from theory texts. I thought I was just going to be skimming through this, but here we are. 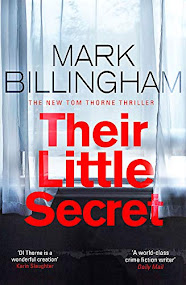 Their Little Secret by Mark Billiingham: a review